Alicia Adkins - Birds of a Feather 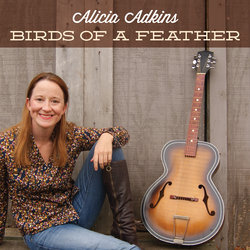 Alicia Adkins is a country and folk singer/songwriter from Austin, TX. With a uniquely varied style, and voice "as sweet as honey," Alicia's lived and played in much of the world; including France, Italy, India, and Australia. In 2012, She tripled her original repertoire and quickly created a buzz in Melbourne's local music scene, playing frequently at venues like the Standard, Old Bar, Retreat, and Wesley Anne. With influences ranging from the Mumford and Sons to Patty Griffin and Loretta Lynn, she released her much-anticipated debut EP - recorded with Pete Fidler and Josh Bridges - here in Australia on June 30th, 2013.

Alicia is in for an exciting year, touring her new EP in Australia and America – and looking to record her first full-length album before the end of the year!


Birds of a Feather is the EP's most distinctive alt-country song that tells of realizing over the course of the seasons that two lovers are in the same boat, missing how they used to flock together.

Other tracks by Alicia Adkins: My Hometown  -  Love 'em and Leave 'em
%