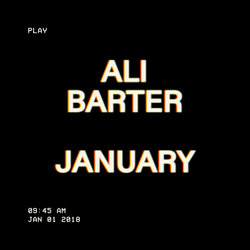 First came the blistering bubble-grunge glory of ‘Ur A Piece Of S**t’, then, her first ever love song 'Backseat', both of which copped a high rotation add on triple j with the former being described as “a scuzzy pop-punk anthem” by Happy Mag. Now, Barter's ode to New Years resolutions; 'January'.

Ali Barter has made light work of amassing fans. Tucked under her belt are accolades from Junkee, The Australian, FBi Radio and Tone Deaf and triple j to name a few. She’s sold out headline tours around the country, played countless festival stages and supported the likes of The Preatures, Chrissie Hynde, The War On Drugs, The Ruebens, Liz Phair and Stevie Nicks.

First peeps at her new live set have seen Barter touted as “looking and sounding like a literal angel” (Beat Magazine) while simultaneously “empowering as f***” (The Music).

From her breakout single ‘Girlie Bits’ to recent cut ‘UR A Piece Of S**t’ and 'Backseat' Barter spins sobering honesty through sugary pop songs, like a one-two punch of staunch self assurance and touching vulnerability.


'January' is Ali Barter's ode to New Years resolutions and depicts the well intentioned, yet largely unsuccessful attempts we all make at change come January 1st. Indeed, some things never change, including Barter’s vocal elasticity; evidenced as she sends her breathtaking falsetto to dizzying heights and reels it back in with razor sharp precision.