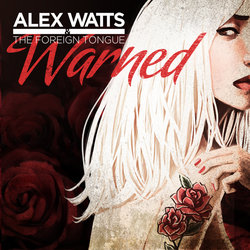 Alex Watts is a singer-songwriter from Melbourne who specialises in intelligent, energetic pop songs. Backed by his band the Foreign Tongue, the quartet have gone from strength to strength since the release of 2012's Mick Thomas co-written single 'This Haunting' and 2013’s follow-up ‘Warned’, as well as appearances at The Queenscliff Music Festival and The St. Kilda Festival.

'This Haunting' received national airplay, and, along with its film clip, was featured on taste-making music blogs both at home, in the US and the UK. The quartet toured the country twice in 2012, performing in many of their favourite venues, such as Melbourne's Cherry Bar and Sydney's FBi Social, helping to cement their reputation as one of the country's most exciting live acts.

Taking cues from the likes of Elvis Costello, Nick Lowe and Neil Finn, this is songwriter-driven pop music at it's best - intelligent, energetic, and uplifting.


'Warned', new single by Melbourne's Alex Watts & the Foreign Tongue, is a portrait of a married man, drunkenly serenading a prostitute in the early hours of the morning. From their forthcoming debut album.