Alanna & Alicia - The Early Bird and the Night Owl 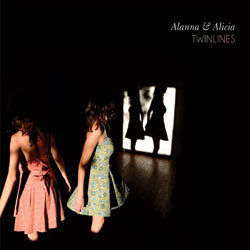 Alanna & Alicia are twin sisters who blend folk, jazz and roots in their original, acoustic songs. Known for their sweet, sibling harmonies and fine songwriting, the sisters have charmed audiences from the National Folk Festival to Fairbridge with their onstage warmth and sense of fun. Their lyrics, equal parts heart and humour, sparkle with an original, intimate voice that is rare in songwriters today.
As identical twins, they share a uniquely intuitive, creative partnership and have a natural musical rapport.
They have had considerable recognition for their songwriting, winning awards at several national festivals. Both have been finalists in the Australian Songwriting Awards and Alicia won Best New Talent at Port Fairy in 1998.
Their band features the fine talents of Damien Neil (guitar) and Silas Palmer / Matiss Schubert / Michelle Meehan (piano, violin, mandolin).

Their much anticipated third album 'Twinlines', recorded and produced by Craig Pilkington at Audrey Studios in Melbourne, was launched at the Port Fairy Folk Festival in March, 2013.

Other tracks by Alanna & Alicia: Fly Like A Bird  -  Double Trouble (The Twin Song)
%