Alana Jagt - If We Had Some Money - Internet Download 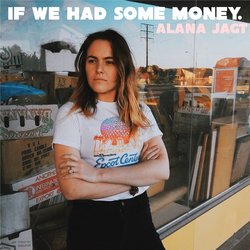 Jagt’s dynamic rasp soars over her blend of stormy folk-rock noir that's refreshing yet somehow familiar, it’s the sound of a thousand lonely AM radios one Sunday afternoon but exactly where and when is a mystery. Live she performs powerful, vocal-led solo affairs; playful trio shows; and with her six piece twin guitar rock band.

With the 2017 release of her solo debut Wilderness, Jagt steadily built a dedicated audience in her own right – one that has followed her from beloved little Adelaide venues like the Grace Emily to performances at Adelaide Guitar Festival and supporting artists the likes of Mick Thomas, Didirri and Kasey Chambers. Her consistent gigging ultimately culminating in touring nationally as support for Abbe May’s ‘Fruit on Vinyl’ tour in late 2018.

In 2019 Jagt released the first single since Wilderness and has since enjoyed support slots with acts as diverse as Ali Barter, Mojo-Juju, Thelma Plum, Ella Hooper, Henry Wagons and Archie Roach as well as performing at acclaimed festivals around Australia including the mammoth Bigsound Festival, Porchland, and Dashville Skyline.


the song was written whilst driving from Whyalla to Adelaide, which takes about four hours. I had been toying with 'I could do a lot of things if I had some money' for a chorus as it'a favorite Homer Simpson quote.

I was thinking 'if we had some money we could've flown', and then the verse lyrics flowed from there.