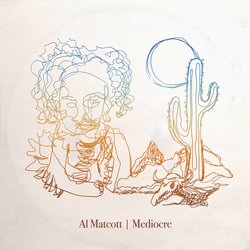 Hi, my name is Al.
I'm releasing music under the name Al Matcott.
It's my name, but Al is short for Alastair and people spell that incorrectly and it bugs me, so Al's fine.
When people are being complimentary about my music they say things like “great storytelling” or
“I love your storytelling.”
I used to play drums in some bands. One person once said I was their favourite drummer in Melbourne (Australia). I used to play guitar and sing in a couple other bands too.
Now I do both, but in my band.
Named after me.
Al Matcott.

Sometimes I play shows on my own.
These shows sound like folk music or maybe country music or maybe like singer/songwriter music or whatever.
Just me and my guitar and the audience and my great storytelling.

Thanks a lot for your consideration.