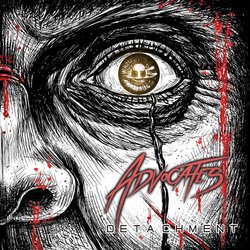 Brutal and relentless, Advocates have fought tooth and nail for their place in Australia’s heavy music scene and have offered up the fierce new single Detachment, premiering exclusively on Triple J’s Short. Fast. Loud on Wednesday 13th July and debuting via Beheading The Traitors on July 14th.

Having toured the country over, playing sold out shows or empty rooms in new cities, they are uncompromising in their energy and talent, consistently delivering first rate heavy music since their inception. It’s this ethos that has placed them on the bill alongside the country’s heaviest talent, most recently playing sold out rooms alongside Make Them Suffer, Dream On Dreamer and upcoming appearances with Polaris.

Detachment is the follow up from late 2017’s Wither, which placed the band among the upper echelons of Australia’s next phase of up and coming in heavy music as well as making noise throughout The US and EU.


Heavy and furious, Advocates have a brutal offering in the form of Detachment. The follow up to 2017's Wither, Detachment is Advocates at their most mature and ambitious.