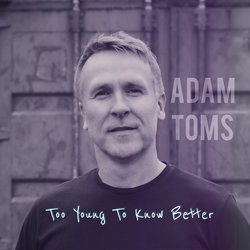 Adam Toms has won awards, toured the land, performed at major festivals and had several radio and Country Music Channel (CMC) chart hits. All this was achieved from 2009 to 2013. 'A lot has happened over the last few years. My young boys who both have Autism Spectrum Disorder are going well, my father died of a heart attack, and I have become a youth worker, just to name a few things. In many ways my new songs are compilations of what’s been going on for me in recent years'.

Since then Adam has been focusing on his young family whilst still continuing to entertain audiences from a more local level where he is based in Benalla in North East VIC.

Adam returned in October 2017 with the release of 'Where Were You When' – a song co-written with Troy Kemp that touched the hearts of all who listened. His latest single 'Too Young To Know Better' see's Toms rocking out in a big way and is sure to be a Summer hit. Adam is known for his big voice in his live shows as well as his mixed banter and sense of humor.


This is the second single from Toms’s forthcoming album. Adam reminisces about his past years in this rockin' track with a with country grunt. Like most of us he admits he has made some mistakes in his younger years but he wouldn’t change a thing about those times.