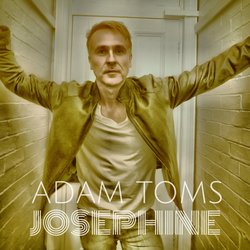 Singer-songwriter Adam Toms has heralded his return to music with his latest album, Where Were You?, filling in the blanks for loyal fans.

The Victorian-based artist is known for his big voice in his live shows as well as his mixed banter and sense of humour. It’s been five years since his last album, but the top 10 album Where Were You? heralds his return to music.

Josephine is the fourth single to be lifted from the album and is a return to what Adam loves best – rocking out with a country edge. The previous three singles, ‘Where Were You When, Too Young To Know Better & Say You Love Me’ all made Adam’s loyal fans excited about his new music again as well as gaining new fans in the process.

The Youth Worker by day sure knows how to mix things up musically with a style combining country, rock, blues and singer-songwriter however all songs have a distinct ‘Tomsy’ flavour.

Adam feels that now is the right time to return and is eager to play audiences his new songs and Josephine is sure to not disappoint.


Josephine by Adam Toms combines sounds of country rock and southern rock to present a powerful thumping track. Written and produced by Toms this is the 4th single from his 2018 album release Where Were You? and will have you singing along in no time.