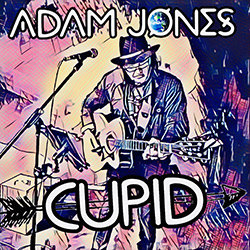 Adam release his debut album, Little Death, in 2017. His catchy and interesting songs traverse many styles such as country, roots and folk-rock. This melodic new song Cupid is a folk-rock tale about finding a lifelong partner in our technological world.

Cupid is from Adam’s new album of 10 songs ‘The Dark Side of the Earth’, which will be released later in 2019. A music video, directed and shot by Luke Van Den Berk of Kookaburra Sound Studio (where Cupid was recorded), will be released online.


A cheeky and fun tune from Adam Jones for his first single of 2019. Classic 70's retro backing, (drums, bass and guitar reminiscent of Al Stewart and Neil Diamond), behind Adam’s featured lyrics plus some new hooky female backing vocals.