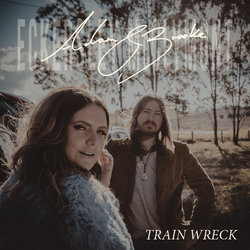 When Brooke McClymont surprised fans by joining her husband Adam Eckersley on stage at this year’s Gympie Muster, news began circulating that more things were to come. Now, the husband and wife duo have shared their first single and video ‘Train Wreck’ and announced their debut album ‘Adam & Brooke‘ will be available on Friday February 9th.

Embracing that opportunity, the couple – who, between them, have twelve Golden Guitars and two APRA Awards to go with Brooke’s two ARIAs – showcase both halves of the duo with “Train Wreck”. A swaggering, soulful country rocker “Train Wreck” delivers a hard-hitting, endearingly honest account of love at full throttle. The accompanying video is directed by Ben Abbott, who also directed The McClymonts “Forever Begins Tonight” video, and was filmed in the New England town of Uralla (near Armidale).


While it may seem a touch bizarre for a married couple’s first single together to ponder the possible demise of their relationship, “Train Wreck” in fact tackles the subject with a maverick spirit that speaks volumes about both singers.