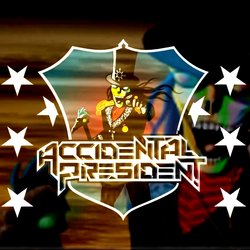 "Formed by four like-minded souls disgusted by the state of the world, Accidental President's sound is hard-edged and raucous, defiantly post-grunge and as tight as a bank vault" [100% Rock Magazine].

Accidental President - now a 3 piece are earning plaudits for their dynamic LIVE show, artistic concepts & showmanship. EST 2015 AP are Visionaries NOT Followers. The socially aware band draw inspiration from world events & current affairs. The name of the band was based upon a school of thought that anyone who wants to be in power should never be allowed, and the fairest most empathetic & balanced leader could perhaps be an Accidental President.

Following their formation in 2015 leading to their well received debut EP release 'jiggery-pokery' in 2017, 2018 saw the return of Accidental President with a changed lineup. Guitarist Dave Ben Lee was joined by Bethany Neville on Vocals & Alper Akin on Drums with the release of their thought provoking, hook laden, guitar laced EP ‘The King is Dead’.


An uptempo riff driven contemporary Modern Rock track with thought provoking lyrics about the narcissist personality trait & how it possibly relates to the state of current affairs. With a catchy harmony driven chorus!