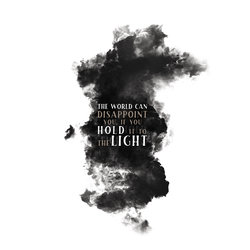 ‘Land of Equal Share’ is the debut single from Above The Bit’s forthcoming self-titled album to be released in 2020.

Lauded songwriters in their own right, Luke Watt & Nigel Wearne join forces to go Above The Bit. Skirting the fringes of blues, country & outlaw folk, their diverse influences include Richard Thompson, Tom Waits and the spirit of Woody Guthrie. Above The Bit shines a light on true tales of mutiny and civil disobedience that lie in the shadows of Australian history.

Nigel Wearne is "one of Australia's emerging songwriters" (Tone Deaf) and Luke Watt is "the real deal…so real you feel you already know him" (ABC Radio). Together, they tap into the psyche and emotive fabric of their subjects, harnessing the power of narrative and verse with an informed historical approach and social conscience.

Produced and recorded by Matt Walker and featuring Danny McKenna (drums) and Steve Hadley (bass), ‘Land of Equal Share’ is a poignant portrayal of good intentions gone wrong. “The world can disappoint you if you hold it to the light”…but sometimes, the world can hold light. In a time of fake news and social dissent, Above The Bit is as relevant as ever.


A poignant portrayal of good intentions gone wrong, Land of Equal Share tells the story of ‘New Australia Movement’ founder, William Lane. A unionist, women’s suffrage advocate and political dissident, who gathered 238 followers and set sail for Paraguay to establish a utopian society. Despite his attributes, his shortcomings came to the fore and what transpired was an unmitigated disaster.