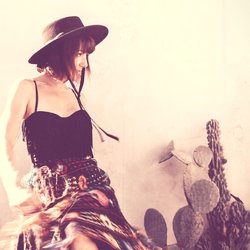 Marrying resplendent vocals with guitar, banjo, ukulele, harp and electric guitar, Cardwell is a versatile chameleon that captivates a room with every song she surrenders to. Pin her down to one style? Just label it ‘good music’. Influenced by the roots of country, soul, blues, rock and folk Abbie blends a signature style. When joined on occasion by a backing band – in Australia, the ‘Texicans’ featuring her talented brother Jeb Cardwell on guitars, in Mexico city, local legends ‘Twin Tones’ – hints of Spaghetti Western, a few songs in Spanish and some vintage Mariachi rock add to an otherwise sultry solo repertoire.

Abbie’s stage show carries us to another place in another time: one of wanderlust, longing, dusking horizons on a lone desert highway across 1950s southwest America, the Tijuana state line and beyond.


This groove is reminiscent of 80's-does-50's pop with a hook that lingers!

A laid-back story of a bad-luck girl turning her day around.