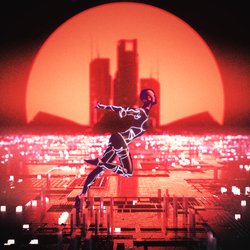 Aspyre create on the edges of digital and analogue sound, crafting electronic instrumentals and dark atmospheric tones, they bring the structures and rhythms of progressive metal into the expanding genre of Synthwave. Dark riffs, melodic synth lines, and soaring guitar solos, create a vibrantly visual sound that transcends listener expectations. Zachary Meagher and Mateus Brandão ignited the fires of Aspyre in 2011. Initially a side project dabbled with when no-one else turned up for band practice, it evolved into a passion to create the energy of rock and metal through a computer. They consumed the sounds of the emerging dubstep scene, and the sounds of Skrillex and Feed Me. Fully immersed in the world of progressive rock and metal, their feeding habits returned them to their electronic roots. Now they were taking cues from Massive Attack, Kyle Dixon and Michael Stein (composers of the Stranger Things soundtrack), the beats of Kendrick Lamar, and film soundtrack composers, particularly Hans Zimmer.
Newly signed to Underfoot Records with an album set to release in 2019, the two continue to drive Aspyre with the same enthusiasm and commitment to exploration they had at fourteen.


Collision is a visceral electronic track, taking its cue from metal bands such as Meshuggah and Northlane. It's fast-paced, and has a raw, in-your-face energy. Melodies soar over heavy synth riffs, and a dark, brooding atmosphere permeates the whole track. This is the sound of a cyberpunk moshpit.