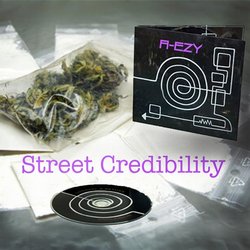 
Explains how A-Ezy has lived the 'street life' and faced challenges other people have also had...