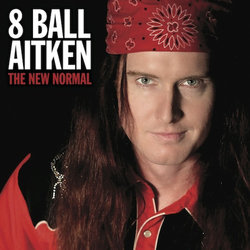 8 Ball Aitken is a wild blend. With a dry sense of humor, utterly laid-back, impossibly dedicated to his six-string muse, absolutely devoted to entertaining at every gig, the young Australian blazing a trail in Nashville is completely committed to getting the masses up on their feet and dancing, and unafraid to get a laugh in the process… while continuing to play 200+ gigs per year throughout Australia, America, Europe, and Asia.
8 Ball’s song ‘I’m Going To Jail’, hit the #1 spot on the Australian Country Music charts in 2014. He has released eight albums. His latest release for 2015, ‘The New Normal’, features 8 Ball’s best slide guitar work to date.
8 Ball recorded 12 brand new songs in Nashville for this album, with hot session musicians including members of Lynyrd Skynyrd, Little Big Town, Emmylou Harris’s and Robert Plant’s bands. In recent times 8 Ball’s music has been used on popular USA television shows ‘Justified’, ‘Breaking Amish’, and ‘Parking Wars’.
8 Ball’s songwriting awards and nominations have spanned his decade-long career. He has been nominated for two Golden Guitars, and an APRA award. He has won two Queensland Song Awards and a Southern Star Award.


This is the soundtrack to minimum wage. If you like laughing at other peoples’ misery than this song is for you. Sometimes, everything just doesn’t go according to plan.

Other tracks by 8 Ball Aitken: Girl In A Million  -  Sleepy